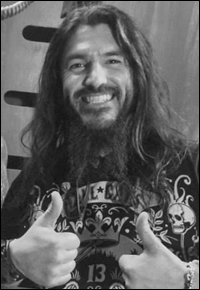 The internet is ablaze...

Thank fuck for Aaron Lewis screwing up the National Anthem or it’d still be going nuts on me!

12 hours after posting my last General Journal my friend texted telling me about the absolute across-the-board positive response my last Journal had gotten from the Head Cases on FB, and if I'd seen it? I said "no", as I rarely read responses.

Around 11PM that night I went and read through the 400+ FB comments, tons of TGJ emails, and texts from friends about what an amazing read it was for them.

It was fucking heart-warming, I’m not gonna say I cried, but I was quite emotional about how positive it was. People just BLEEDING Machine Head. It was amazing to see the reaction to this Journal, 95% of which was about the absolute chasm between Facebook "likes" and actual fans, and riding shotgun with the Head Cases.

And then Blabbermouth got a hold of it…

And of course, they didn’t include the rest of the Journal, so it just looked like some random "attack" on COB and their fans. Next thing I know I’m getting a shit ton of concerned managers calling, label folks emailing, and the typical troll responses I get whenever something I say gets twisted controversially.

The ultimate troll picture and video gets posted hundreds of times

Top Blabbermouth commenter Joseph Fischer wrote:
"ugghh omg...trying so hard to be clever "alexi not so great crew" HAR HAR HAR good one you slobbering idiot doofus. And picking on fans being a vigin, or whatever....tacky retardation. Rob, your an insecure washed up hack , taking it out on alexi (who the goddesses flock to), because you hate how you look. Tacky tacky tacky motherfucker. Machinehead is bland as fuck, I'm surprised they are as popular as they are. Eat shit Flynn. You hate deep purple right? Your band name is very original lol Rob Flynn-are you smoking meth? Your bro metal really is fucking lame."

Metal Injection commenter Dirty Old Bastard Cole said:
"Don't lie all these people around here that you are some big, bad motherfucker, because you're not. First of all - you aren't fucking anyone, nor you ever have fucked anyone or anything, especially not my mom, because she's like dead for decades, more or less. And even if she's not dead, she would never ever go to bad with such a lame excuse of a human being. So, to conclude my reply: go fuck yourself with a stick covered with feces, you ignorant, virgin, cockless asshole."

Jasonic M over at MetalSucks wrote:
"His attitude is so jock/steroid/fake macho bullshit, his vocals suck, his lyrics suck and MH fits more in line with FFDP/Slipknot/Hell Yeah/Limp Bizkit/mall pop teen metal crowd more than any straight heavy metal/thrash/speed band. Since TOOL is already taken, maybe he should rename his band MaShit Head!! Seems more fitting. He should put out a MH anthology called "you can't polish a turd"....shit's always going to be shit"

Laughed my ass off at that one! MaShit Head!

Da Homie wrote:
"Both these niggaz is gay AF anyway nawmean, i mean this one pussy ass bitch is talkin shit N spect not 2 get shit 4 it. Dumbazz bitch, then the other lil pussy ass blonde girl nigga be playin it cool N shit, fuck yo passive ass "hate lite" BS mah nigga you fake as fuck"

FuckOff wrote:
"If you studied music in the slightest you would understand that MH really is not that great at all. He is also not a good front-man, let alone one of the best. All he does is curse every other word, and it gets old very quickly. His lyrics are abysmal and his voice is even worse. He cannot sing live for shit, he can hardly play his guitar live, and when he does it sounds like it is being played through a chainsaw. They are such a sloppy band it is embarrassing. If you want a better album than Burning Red, go record yourself eating your own shit. That would definitely be a better album."

Back over at Metalsucks, El Fucko wrote: "...says a guy who bragged about pissing in adult diapers?!"

Even industry folks chimed in on the completely out-of-context Headline-Bait, with our ex-publisist Maria Ferraro commenting "stick to singing", and my former guitar tech (and brother of Slayer singer John Araya) posting up (again) the ultimate troll picture.

At least someone on the internet was able to conjure the funny.

One person at MetalSucks calling themselves M Shadows wrote:
"Rob you should make a cover album. Look how much money I made from it!"

Cycopl wrote:
"I lost my shit at that "can't-get-a-date-crew" line."

And over on Twitter someone wrote, "Oh no, a teenaged girl has hacked Robb Flynn’s account and posted inane ramblings".

Now THAT was fucking funny!!

Credit MetalSucks for at least seeing the HUMOR in it. That’s right, the fucking HUMOR in it. Something completely lost in the link-bait headlines. This wasn’t some "attack". JEEZ... lighten up!! "Can’t-Get-A-Date-Crew"!!?? I was laughing my ass off writing that down. That shit was COMEDY GOLD!!

It’s hilarious that when the trolls get trolled how butt-hurt they get, WOOT WOOT!!

That’s the Link-Bait world we live in nowadays. Take a completely out-of-context statement, add a super-inflammatory headline, leave out info, and then, take a really bad screen shot from YouTube, and VOILA! LINK-BAIT!!

It’s called being able to laugh at yourself. And believe me, when my old, creaky, overweight, hungover, un-showered-for-5-days, wrinkly ass wakes up everyone morning and creaks over to the bathroom, the first thing I do NOT think is “oh yeah, Rock God”.

And yes, I LAUGH every time that "From This Day" picture is put up too!! What the fuck was I thinking 15 years ago dressing up like a BOX OF ORANGE JUICE with liberty spikes!? And why the fuck did we let Roadrunner talk us into to hiring the Master P. video director again…!?

So flame away trolls…