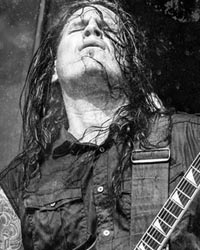 During a brand new interview with the "Talk Toomey" podcast, Phil elaborated on his reasons for departing MACHINE HEAD after a 15-year run.

"I'm not gonna badmouth the breakup or [Robb]," Demmel said. "I think he's an amazing musician, and the times I had in MACHINE HEAD were awesome. The last few years just weren't. We just didn't work as people anymore.

"I think [Robb] strayed from the path of being a band," Phil continued. "He stayed on his path. Instead of us being on the same path or asking to be on the same path, it just became, 'This is what we're doing.'"

According to Demmel, he was minimally involved in the making of MACHINE HEAD's latest album, 2018's "Catharsis", a record that he says he "hates." He explained: "There's moments of what I wrote that I like. I wrote most of the music to 'California Bleeding', but then [Robb] wrote the lyrics on top of it that I just wish thatâ€¦ Me and Dave [McClain, drums] talk about it, like, 'Fuck! I wish I could take my riffs back.' [Laughs] 'No, that isn't what we want them used for.' So, I think, in that sense, it just became a Robb Flynn solo project, and that isn't what I signed up for. And the last few years were basically collecting a paycheck. And I just couldn't do that. The stress and all the talks and all the 'can't do this,' 'don't do that,' 'don't do this,' 'don't stand there,' 'don't say this,' 'don't sing the words to the audience,' don't point.'"

After Demmel and McClain announced their decision to leave MACHINE HEAD, Flynn released a video message in which he blamed their departures on the fact that he and his bandmates "have grown apart as people. Musically, we've grown apart," he said. "I have held on too tight to the reins of this band, and I have suffocated those guys." He went on to say that his "rough edges" have given MACHINE HEAD the success that it has, but "they've also hurt the people around me. I've got a lot of drive, but I've got a lot of anger and rage. And that drive of mine has alienated folks in the band," he said.

Despite the fact that Demmel and McClain are no longer involved with MACHINE HEAD, the guitarist believes that Flynn will "absolutely" continue the band with new members. "There was never a doubt in my mind that he wouldn't [carry on]," Phil said. "Especially in my position â€” I think that the guitar position for that band would just be a plug-and-play situation. I contributed heavily to the material. But in the end, Robb wants to do what he's gonna do, so I don't know how much that would be a factor. The records that I contributed to â€” five records; well, actually four â€” I'm not gonna count the last one. 'The Blackening', '[Unto The] Locust'â€¦ Those records would look entirely different without my contributions.

"I think losing Dave McClain is a huge, huge blow," Demmel added. "I think that he was such a part of that process, and finding somebody is not gonna be easy. But there's never been a doubt in my mind that [Robb will] find two people to probably just be hired guns. I don't think that he wants to take on the headache of the corporation and all that. This is what he's good at. He's an amazing musician. He's great with notes and note selection and melodies and layering stuff. And he's got Jared [MacEachern, bass] with him, who's fuckingâ€¦ I think he was the best musician when I was in the band. The guy is classically trained and knows theory and can sing his ass off and can play."

"I look back at my time in the band and I'm really proud of everything that we've done," Demmel said. "I helped take this band from its lowest point to its highest point. We wrote some amazing records, played some amazing shows. So I'm trying to reflect on all the positive stuff. And just being free now ofâ€¦ So much was held back towards the end â€” in the past couple of years, three or four years â€” and just being stress-free is what I'm kind of focusing on now. Just focus on all the positive stuff that we've done and move forward with all the fun stuff that's happening now."