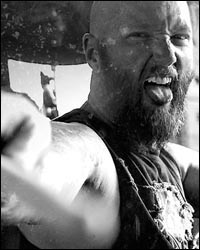 Check out our new interview with Dave McClain of Machine Head. Dave talks about his reasons why he chooses to play Yamaha Drums, his biggest influences and his current Absolute Hybrid Maple set-up.

If you have experienced a Machine Head live show before, you have witnessed the special chemistry that exists between each of the band members. The outstanding sound of each musician in the band, results in a special energy that is given on to the audience driven by the beats of Dave McClain.

Dave is seen as differing from many metal drummers because, as well as drumming with consistent speed and power, he incorporates a creative variety of uncommon rhythms for a metal drummer, using his double-bass drums to great effect.

In the following interview, Dave talks about his reasons to play Yamaha Drums, which drummers have had greatest influence on him and what his current set-up is.
Dave plays Yamaha Absolute Hybrid Maple in "Polar White" finish.