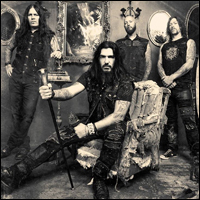 Machine Head had to cancel the July 8 show in Fukuoka, Japan due to a typhoon that flooded the roads and got the gear stuck 300 kilometers away. HOWEVER they did play anyway.

Machine Head rented some gear and did a show as the mighty "Ten Ton Hammer". Cover versions of "Roots, Bloody Roots", "Fast as a shark", "Children of the Grave" among others with some Machine Head songs were palyed.