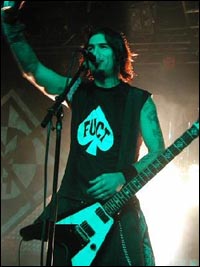 On having two of the band's shows at House of Blues concert venues on Disney-owned property cancelled:

"It's pretty disturbing. We are shocked that in this day and age, in 2007 America, that bands can be pressured, (and) that promoters can be pressured by a business and be removed from a venue because somebody doesn't like what your lyrics stand for or think that your fans are crazy. We've played these venues before, and there was no indication that anything was going to be different."

"It's basically a form of profiling, and it's pretty shocking. A result of 9-11 is that you have people acting in a way they say makes the world a safer place. I just want to know, safer for who?"

On "The Blackening", the best — and darkest — album of MACHINE HEAD's career:

"After all the success with 'Through the Ashes', we felt that now more than ever we could not play it safe. We couldn't make 'Through the Ashes II'. That was a record for its time, and that time passed. We set out to challenge ourselves."

"Recording this was the challenge. Everything became so epic that everything else needed to become epic just to sound right. We have songs with 10 tracks of just snare drum. Just the beginning of 'Clenching the Fists of Dissent', that acoustic intro, was cut with 84 different tracks. Mixing this record was hell."

"It was a huge day for metal. I didn't think we had a chance against MY CHEMICAL ROMANCE or FALL OUT BOY. Those are both huge commercial bands championed by Kerrang! (Our) album is as edgy and as extreme as we've ever gotten, but the readers and editors of Kerrang! found it more relevant. Our jaws just hit the floor when they announced we won."

On touring with HEAVEN AND HELL:

"Touring with HEAVEN AND HELL was surreal. Walking out of my dressing room and seeing (BLACK SABBATH guitarist) Tony Iommi was too much. It took me two weeks just to get my head around that. I used to write letters to BLACK SABBATH when they broke up with Ozzy (Osbourne), pleading for them to get back together so I could see them play 'National Acrobat' before I died."

On growing up a metalhead in the San Francisco Bay Area:

"('The Blackening') is steeped in the stuff I heard growing up. I was fortunate to be 14 years old growing up in the golden age of thrash. In L.A. the musicians acted like rock stars. In the Bay Area, people were accessible. When I first saw METALLICA, James Hetfield was hanging around outside the auditorium. You could get his autograph and talk to him. To a young kid that made a huge impression. That's the spirit we are trying to carry on. The Bay Area sound always had more evil notes than other styles of metal."