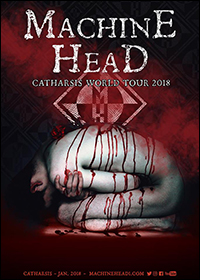 Following a severe lung infection that shut Robbâ€™s throat down mid-show in Pittsburgh and resulted in the next 2 sold-out shows in Cleveland and Detroit being cancelled, Machine Head will resume their tour tomorrow night in Des Moines, Iowa.

The day after Pittsburgh, Robb visited a clinic in Cleveland and the doctor put him on pharmaceutical cough medicine, gave strict orders not to sing or talk and get â€œvocal restâ€. A particularly strong chest infection has savaged the U.S. this winter, and unfortunately the doctor said what Robb has will not be knocked out by antibiotics, heâ€™ll just have to "ride it outâ€. Based on the numerous patients coming into the doctors clinic, he estimated that the infection could last up to 3 weeks.

With the tour resuming tomorrow night in Des Moines, Iowa, and an already rigorous tour schedule in place, the band was heading into the roughest stretch of the U.S. tour, a 5-in-a-row block of dates that even under the healthiest conditions would have been ambitious to sing and perform five - 2 1/2 to 3 hour hour sets in a row.

Machine Head have opted to postpone the Madison, WI shows at the Majestic Theater, (to break up the 5-in-a-row block), and will add it to the 2nd leg of their â€œCatharsisâ€ US tour happening in the Fall of 2018 along with the Pittsburgh, Cleveland and Detroit make up shows.

Refunds will be available at point of purchase.

When the new dates are announced, all ticket purchasers for the cancelled shows will receive an email and access code to purchase tickets before the general on sale; guaranteeing you a ticket to the show.