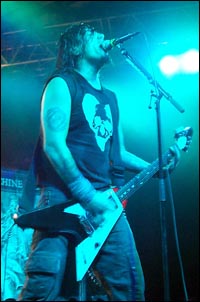 San Francisco Bay Area metallers MACHINE HEAD will serve as main support for METALLICA at both Los Angeles shows on December 17 and December 18 at The Forum. They will replace the previously announced main-support act LAMB OF GOD, who was famously banned from playing the church-owned Forum in 2005 because church leaders were offended by the group's previous name (BURN THE PRIEST). Also appearing on the bill is THE SWORD.

In an April 2005 interview with U-Daily Bulletin, LAMB OF GOD guitarist Willie Adler stated about the Forum ban, "It is a bit of a letdown, especially since, if they (the church) had done any kind of proper research about us, they would have found that we are no way evil or satanic. It was just a name, that's all. They really had no idea who we are, and I kind of laughed at their closed-mindedness. And taking the good with the bad, by raising such a fuss, they probably turned a lot more people on to us because of it."

He added, "The really funny thing is, OBITUARY [replaced] us [on the SLIPKNOT-headlined show on April 9, 2005 at the Forum], and their music is probably far more evil than their namesake would imply."

Speaking to the Los Angeles Times in a February 2005 interview, Marc Little, chief operating officer for the Faithful Central Bible Church's business dealings, stated about the church's decision to cancel the LAMB OF GOD concert, "This is a building that is owned by a church, and we are sensitive to our congregation and to our obvious religious beliefs. At the same time, we have to balance that with being a business. This is a band that was formerly known as BURN THE PRIEST, so it's a fair assumption that some of the stuff they are singing may be antithetical to our beliefs."