"Is There Anybody Out There?" Cracks Top 40 Of U.S. Active Rock Chart 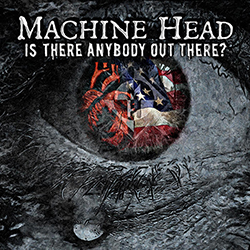 MACHINE HEAD's latest track, "Is There Anybody Out There?", cracked the Top 40 on the Active Rock chart in the United States. It marks the first time any Nuclear Blast artist has entered what is widely considered to be the "official rock chart" for the United States, and only the the third time the band has charted in the Top 40 in their illustrious career.

Comments MACHINE HEAD vocalist/guitarist Robb Flynn: "Fuckin' A! Pretty darn cool when you consider that this song was digital-only, one-off, without the benefit of the promo/hype that usually surrounds an album release, plus no video, not to mention no physical release at all in stores.

"Will it stay in the Top 40? Who knows! Probably hang on another week or two, but even that is a feat in this day and age.

"Some major props need to be given right now. First off, thanks to Gary Jay and his team over at Land Shark Promotion, those guys have been hammering away at folks to get this song on to the radio playlists, and it worked!! GREAT job guys!

"HUGE, ridiculous props go to Vinnie, Jose and the entire Octane team over at SiriusXM for playing the living shit outta 'Is There Anybody Out There?' Those fine folks have played the new tune anywhere from 35 to 50 times a week (HOLY SMOKES!?), and were far and away the #1 supporter behind us.

"Both KILO in Colorado Springs and WJJO in Madison, Wisconsin rounded out our top three big supporters, and they REALLY got behind it. The important thing to remember about these guys is that these stations are what is known as 'terrestrial radio' meaning it is not satellite/subscription radio, but that classic sort of 'Wolfman Jack' idea of what you think of when it comes to an American DJ playing songs on the radio. It was HUGE that these stations got behind us! Thanks!

"Monte Conner and Nuclear Blast deserve big props for believing in the song, and giving MACHINE HEAD the freedom to just release a stand-alone, digital-only song 20 months after an album release, and treat it like it was a big fucking deal!

"Last but not least, BIG shout out to the Head Cases out there calling in requesting the song, voting in those mind-numbingly stupid 'Smash or Trash' things, and really just going out there and fighting for it, debating it, hating on it, believing in it.

Flynn adds: "The generic audio track on YouTube is over 450,000 views.

"And the Spotify numbers are impressive, 1.3 million streams for the new song, which is nearly 3 times more than every other song off of 'Bloodstone & Diamonds' not named 'Now We Die' or 'Game Over'.

"What does all of this radio ga-ga, and numbers/metrics shit mean?

MACHINE HEAD recently wrapped up the tour cycle for its first Nuclear Blast Entertainment album, "Bloodstone & Diamonds", where the band toured for twenty months and performed a whopping 283 concerts on five different continents around the world. Around 250 of those shows were performed as "An Evening With MACHINE HEAD," with no support bands and performances often lasting two and a half to three hours. Three tours of the United States, three tours of Europe, (including multiple dates in Russia and Greece), shows in Mexico and South America, a completely sold-out run of nine Australian / New Zealand shows, sold-out dates in Japan,and their first-ever plays in Taiwan and Thailand, and all without any festival performances which the band publicly announced they would stop performing at in 2014.