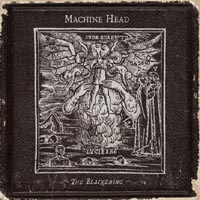 Roadrunner Records has revealed the details of the U.S. version of the special edition of "The Blackening", MACHINE HEAD's Grammy-nominated masterwork, which is due on October 28, 2008.

(Details of the European version of the special edition of "The Blackening", which will be available on October 27, can be found here.)

Hailed unanimously as the best metal album of 2007 by journalists, metal radio stations and fans alike, "The Blackening" earned a Grammy nomination for the fan-favorite track, "Aesthetics of Hate" and all the while MACHINE HEAD continue to earn "the hardest working band" title with over 19 months on the road in support of "The Blackening" (with five U.S. tours alone) and no signs of stopping soon.

"The Blackening Special Edition" is two-disc CD/DVD set that will feature an assortment of extras, including rare bonus tracks such as covers of IRON MAIDEN's "Hallowed Be Thy Name", over an hour of live performance footage from With Full Force, Download and Rock in Rio festivals, three uncensored music videos for "Aesthetics of Hate", "Now I Lay Thee Down" and "Halo", a "making-of" featurette on each video, "The Making of The Blackening" and expanded artwork. There's also what many hardcore fans have been rabidly waiting for: four never-before-seen performances of MACHINE HEAD celebrating the 10th anniversary of their debut album, "Burn My Eyes", captured in Philadelphia in 2004. This special edition is a must have for any fan of this Bay Area band that is steadily carving out "legendary status" for itself within the metal scene.

MACHINE HEAD spent the summer headlining the second stage of the first annual Rockstar Energy Mayhem Festival and the band will cap off two extremely successful years as direct support on METALLICA's U.S. headline tour in December 2008 and January 2009. METALLICA frontman James Hetfield was quoted in Revolver as saying, "'The Blackening' [is] unbelievable. Unbelievable sound and power. It sounds like a band on fire. They have really turned it on again for me."

A preview clip of the live footage is available below.