THE GENERAL JOURNALS: DIARY OF A FRONTMAN... AND OTHER RAMBLINGS - Part 10 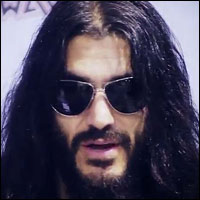 You ever feel let down?

Like everyone you know is just a complete and utter fucking idiot? That the people in your life are all part of some gigantic plot to test you to your very breaking point? That you're in some fucking game that you don't even want to be playing in, and yet, somehow you are forced to roll the dice over and over again, so that you can lose, and learn some goddamned lesson you're supposed to learn, but are never sure if you do learn the lesson, because not shortly thereafter, you have to roll those same black and white squares again, and the same irritating cluster of black dots comes up, and the identical result happens.

That's what I feel right now.

So unbelievably frustrated beyond belief.

A hamster wheel, continually spinning under my feet.

Swallowed by the suffocating silence of a breathless watery abyss.

At the bottom of a spider hole, staring at the faintest light up above, so far away. Clawing at the jagged rock walls until fingers are bloody nubs

A thick black fog behind my brow, forcing eyes closed.

A dream, running as fast as you can, feet stuck in some invisible quicksand.

A dream, flying, for one brief moment in the air, free... some inexplicable reason you start to fall... nothing stops the descent.

You want to change it, you try to change it, you fight to change it, and just before you hit the ground you wake up. Or you don't... like some slow motion scene in a movie, you watch your body slowly break apart. Smash on the concrete. Shatter in the dirt. Guts splattering. Bones breaking. It doesn't hurt, but you know it's bad, it's very bad.

And then you wake. "Is this dying?", "Is this the afterlife?"

You realize you're awake, heart racing, normalcy sets in, you remember it, understand, take it in.

That every failure, you have to own, it was your fault, that you deserve it, that there is no one to blame but yourself.

Nothing is going to change. Nothing will change.

What did Mitch Lucker write?

"The dead are living".

Sink to the bottom.