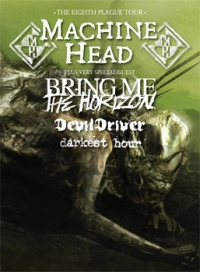 Tonight is the second show of the Eighth Plague Tour with Machine Head, Bring Me The Horizon, DevilDriver and Darkest Hour in Stockholm, Sweden. TakeMyScars.com will be there and cover the show.

Don't expect the same coverage as in Oslo the other day but we will try and squeeze in some updates during the night. Pictures from Oslo, both from the show and backstage will be up tomorrow or at the latest on Saturday. Stay tuned...