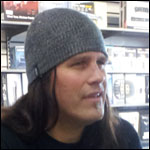 A one-minute promotional video for Jackson guitars starring MACHINE HEAD's Phil Demmel can be seen below.

Demmel joined MACHINE HEAD a decade after his previous band, VIO-LENCE, broke up; VIO-LENCE being the band that he and Rob Flynn, MACHINE HEAD's lead singer and guitarist, formed together as teenagers. Robb went on to form MACHINE HEAD in 1992 and Phil joined them in 2003.