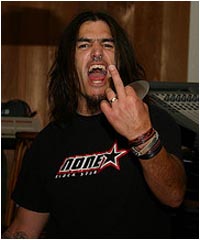 Just got back from Japan after our "around the world in 15 days tour". Really awesome experience over there in that part of the world, and for the first time, due to the more open schedule, we really got a chance to soak up the culture and check out some of the sights - something I rarely ever get to do, as most of the time it's straight to the venue, interviews, play show, on to next show. So having the extra time was awesome! It's been 3 years since we played the 2nd annual Desert Rock Festival, and the city has literally quadrupled in size... as such the attendance was also a lot higher this year. The show went really well, although humorously, after our fourth song ended and we had a break, I was given a stern warning by our tour manager that went something along the lines of "stop swearing onstage, the secret police are on the way, and they'll arrest you if you swear again!" And he was fucking serious! I promptly stopped, though one or two bad words may have slipped out "accidentally". We were a little bummed that the Killswitch's and the As I Lay Dying's didn't stick around to hang out, or watch our show, especially since we hadn't seen each other in ages (they had to go shower back at the hotel... presumably together) but the Korn dudes hung out, watched the show, and we raged a bit after. Maybe it was because we've played there twice, but to our surprise, according to the promoters, Machine Head had the highest attendance of the day with over 12,000 people checking us out. Fuck yeah!! Thanks to Jackie and all at Center Stage Management!

Had the day off the next day and watched Muse play from the side of the stage, and seriously, I was fucking BLOWN AWAY. I've been a big fan of this band for a few years now, but had never gotten a chance to see them, so I didn't really know what to expect, but MAN, I haven't been moved by a band like that in years. Adam was hanging out in front too, and was equally blown away, he had never even heard them, and it was a literal revelation for him. Start with "Absolution"!

Next up was the satanic flight through the shithole airport of Amman, Jordan, where passport control officers and security alike must certainly suck cock on the side for extra cash. We eventually made it through to Israel and checked out the beach a bit before getting to the club. Show was sold out in advance and having never played in Tel Aviv, we didn't really know what to expect. Playing in a country that has been ravaged by war for the last 60 years, staying in a city that is less than 50 miles away from the Gaza Strip definitely adds a bit of an edge to any show, but man... what a fuckin' incredible experience. Quite literally one of the greatest shows and audiences we have ever played to, it was a near-religious experience. FUCK! People were feeling it so hard, sing-a-longs were unreal, "Descend" made a very real connection with the audience, heavy energy... you could practically see it, it was so real. We basically played until we dropped, sweating every fucking thing we had out. We seriously felt more alive after this show than I think we ever have. From the bottom of our hearts, thank you Israel.

Got to give it up to Phil, he soldiered through all of these shows like a champ. After starting off the flight over with the same bronchial infection that I had, he also got the flu, and then caught the pink eye that his son had... by the time we got to Japan he had diarrhea, and next vertigo! Needless to say, he was loving life for that first week and a half of the tour! Christ!?

Anthem Productions were the promoters for Israel, and they really went way above and beyond for us, they and did an incredible job. Me and a couple of the crew guys went to Jerusalem the next day with the promoter, and got a guided tour through the old city. On the highway into the city you pass a place called Hell, which is apparently where the infamous mythological place got its name from, as it was once where they used to burn babies and virgins (I was like, "dudes, we're on the Highway To Hell!"... *ba-dum-pssh*) Starting off at the Jaffa Gate, we got a guided tour down to the Wailing Wall, down Via Dolorosa (the path that Christ apparently walked on his way to the crucifixion), and eventually to the Church of the Holy Sepulchre, which is built atop the area where Christ was crucified, and still has some exposed rock from the area. I'm not a Christian or very religious at all, in fact, I find a whole lot wrong with organized religion, but there was definitely something very moving about it, and there was no doubt a rad energy about the place.

Next up was Bangalore, India, which was another first for us. Bangalore is apparently the Silicon Valley of India and most of the tech support that we Americans receive is based out of there. It was fuckin' crazy though, nothing could have prepared us for the crazy conditions... it went from severe squalor to jaw-dropping opulence over the course of three city blocks, then right back to squalor, it was insane. As Shawn from Megadeth put it "It was like a block of paradise... in the Bronx!" The festival itself was a bit disorganized, and the main promoter Solomon treated our crew like shit, which was a slap in the face considering our long-standing relation with him, but the kids more than made up for it... fuck, the kids were awesome!!! We talked to folks from Mumbai, Delhi, kids drove 2,000 miles just to see Machine Head, we even had the infamous Tharsh of "Tharsh Eats Balls" fame who'd flown in from Bangladesh... it was a rad show!!! Considering the average income is $400 dollars a month (!), the fact that there were so many Machine Head fans there really meant a lot. We'd gladly go back there in a heartbeat.

Next day, me and the crew guys tripped around Bangalore, went to the Bull Temple, went to the Ganesh Temple (where they have an effigy of Ganesh made out of a 400 pound slab of BUTTER?!), the Botanical Gardens, and then went to the Shiva Temple. Again, I don't follow any of these religions closely enough to truly understand the magnitude of it all, but there was again a very tangible vibe. Driving in Bangalore... well, let's just say that it's something everybody should experience. It is complete and utter lawlessness... no stop signs, no speed limits, thousands of small cars, mopeds and bikes just fucking GO! It was better than any roller-coaster I've ever been on, and the fact that cows and oxen are just randomly hanging out in the middle of the street eating garbage only adds to the excitement. Don't even get me started on the glory of straight peeing on public walls whenever you've gotta go. Again, needless to say, Bangalore RULES!!!

Japan was the final show of the run, having not headlined there in 8 years, we again didn't really know how things were gonna go. As I was peeking out at the crowd during the intro, everyone was standing there so polite and quiet, I was like "man... fuck". But GOD DAMN was I fucking wrong. HOLY SHIT!!! The moment we started "Clenching", it was pure fucking insanity, with one of the most brutal pits we've had in a while, and by far the most violent circle pit of the entire '08 run... and that includes the HellYeah tour! Mother fucker!!! What an amazing show. I was really happy with how well we played actually, and though both Phil and Dave had a bad case of the "Hershey Squirts" the whole day leading up to it, they fucking brought the thunder. Thanks to Creative Man Productions for the amazing night! Tokyo kicks ASS!!!

So now that we're back, we're gonna chill at home for a week or so and just decompress... I'm sure this diary sounds about as ragged as I feel. After this week or so we'll begin filming a video for "Halo" which we've developed a really amazing idea for. Really different and kinda "arty" if I may say so. Mike Sloat will be involved again, so as always, we're SUPER excited! After that we gear up for the Metallica dates, then headlining the With Full Force Festival again (woo-hoo!!!). The Mayhem tour starts right after that, which we're super stoked about. And then... more touring!!!

We're fortunate that we're getting offered a lot of support/festival slots for the 1st time in years on this album cycle, and even though it's kind of a bummer to you guys that we're not doing the standard 1 hour and 40 minute set we've spoiled you guys with over the years, we ARE thinking of you fuckers, and at some point on this album we will be doing the monster setlist tour from hell!!! Fuck, we even soundchecked "Blood Of The Zodiac" in Tokyo just to blow out the pipes. It won't be anytime soon, but rest assured my beer-breathed brethren, it'll happen. We've just had so many opportunities to play in front of new people with The Blackening, we'd be foolish not to. Too many new bands have taken this incredible form of music that means so much to me - that has literally saved my life - and watered it down. We need to show the people that there IS music out there that's deeper than that... more vital, more meaningful, and more powerful. If it takes playing the game to get our music into the ears of more people, so be it... because in the end, that support slot, or that edited video, or that opening band you don't think deserves to be on the same stage, it all puts us in front of fans that don't yet know what Machine Head has to offer. And before you know it, those fans are our fans, and before long we will be their gateway drug into a better world... a world that is far more intense, maybe even a little dangerous... but what better drug to be hooked on than metal?