The General Journals: Gothenburg Gave Up The Pussy 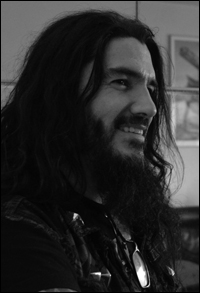 This is a little late, but I was just talking to Jon Weiderhorn at Guitar World yesterday about a song we recorded in Gothenburg, and it triggered a ton of great memories so I felt like sharing.

Goteborg Sweden was an EPIC ending to an already epic tour! It threw down in a big way, and partly because the expectation for Gothenburg was so low. Why? Well because they never wanted to throw down for the M-to-tha-H, well…ever!

Seriously, out of all the places we played on our last tour, (and there was a lot of amazing nights) this was definitely one of the funnest! Everything seemed to wrap into one as the show itself was ruling, as was the 4 days off after! For myself, it was 4 nights of epic hangs, good friends, decompressing from a long and stressful tour, and laugh-til-I-hurt raging drinking sessions…

So why did we fall in love with Gothenburg? Well, for one, Gothenburg has been ICE FUCKING COLD to Machine Head for the last 20 years, and I ain’t talking about the Swedish weather either. Seriously, it’s been a long haul with the Swedes in “general,” but that city more than any other, make us work for it. It’s kinda like when you see a chick that you like... man, she’s hot… you want to get in her pants so bad, and she just ain’t giving up a thing. So you keep trying, you’re trying and trying… barely a smile. You’re like, man what the fuck? And then years later, something happens, and she finally succumbs to your charms, you’ve been working at it so long imagining what’d be like, even if it wasn’t good, you’d be like Eddie Murphy in the Ritz-cracker-skit, “man, that’s the best pussy I ever had!” (look it up, comics today have nothing on Eddie!)

And so, yes indeed my friends, yes indeed. After 20 years of working at it, Gothenburg finally gave up the pussy! And let me tell ya, it was some good pussy. Blonde, Swedish, trimmed-up, sweet smelling’ pussy at it’s finest. We’re talking velvet walls shit! 20 years and oh, so worth the wait!

We had a bunch of friends in town (Biffen, Borivoj and Martin, Sharlee from Arch Enemy, our long-time photographer buddy Henning, Bjorn from In Flames, Ulf fromTakeMyScars.com) I had Borivoj and Martin, the band, and our crew record some back-up “HEY’S” in the dressing room on a new song called "Take Me Through The Fire.”
The gig started out good enough; it had sold out a few weeks in advance. The crowd was raging along nicely, but then we got to “Darkness Within,” and as I was talking to the crowd in the intro, something changed. I could feel it change. When I started it off the 1st verse, the crowd was singing really loud, by the “whoa-whoa’s” it was crazy, by the last chorus was so fucking loud it gave me goosebumps! When I asked them to sing along at the end for the "do-do-do’s” (you know what part I’m talking about, LOL) they just kept going… and going... and going… and going…!!! Pretty soon the whole place was jumping up and down and clapping, singing the "whoa-whoa’s", THEY DID NOT WANT TO STOP! It was c-r-a-z-y!! It went on for minutes! From that point on, something changed, there was a charge of electricity in the air, and it only got more intense as the night went on. It ended on such a high that I was buzzing for hours after the show.

We got hammered in the dressing room for a while after the show, someone told me "I was a killer frontman, a cross between Paul Stanley and Lemmy," so the joke all night was that I was "Lem Stanley!" We then went bar-hopping all over Gothenburg celebrating Mudbilly, Jared and Rodrigo’s birthday and we ended up having a great hang at a place called Rockbaren. We then stumbled back to our tour bus which was still parked outside the venue as the rest of the crew were passing time before going back home (I stayed in Europe to do press tour for 2 weeks), and as we stumble up to the bus, I hear Eminem's "Berzerk" BLASTING! I can see the entire bus is packed with girls, and all the single-guys in my road crew are making out with hot Swedish chicks. I was like, what the fuck!!?

We joined the hip hop dance party mayhem and it was just awesome. I’m a married man of 14 years, I live vicariously through my crew most of which are single. The rest of our friends join in, and now the bus is PACKED, 25 people raging on a bus. It’s a full-blown major-rager!! Everyone on the crew gets laid, my sound guy scores 2 different chicks over the course of the night, it was fucking nutzo. I was proud and happy for my crew, it had been a while for all of them, they needed it. I stumbled into the hotel breakfast room at 8AM, ate some amazing eggs and bacon, went to my room and slept the best sleep I’d had in weeks.

I got up, grabbed some 2 latte's, did some work, then our sound guy / engineer Steve Lagudi (who stayed back with me), went looking for food, we stumbled upon Bjorn and Peter from In Flames’ upscale burger joint called 2112 (named after the classic Rush album) and popped in. While inside Steve and I proceeded to grub down on some of the most delicious burgers I’ve ever had in my life. The food was fantastic, and to me so much of a good eating experience is the attention to detail. The burgers are named after famous songs, (i.e.: the “Smoke On The Water” burger, “Hell Awaits” burger, “The Number Of The Beast” burger), and come with Truffle mayonnaise, caramelized onions, aged cheddar, and a Jack Daniels glaze. We both got the “Smoke On The Water” burger. It came with a small rectangular side of coleslaw, and it’s own miniature fry basket of french fries, plus 4 dipping sauces that were out of this world (Chipotle was my fave). The check even comes with a 2112 guitar pick. They say the devil is in the details, and 2112 has got the details right. In fact every meal we had in Gothenburg was pretty damn impressive!

After that we went and hooked up with the same friends from the night before at a bar called Pattingtons Pub and we raged there til closing. We then went to another bar down the street, went back to Rockbaren, then ended up at Ulf’s apartment where I played DJ off of his Spotify, and where I proudly played everyone some “new jams” off of my iPhone (which took 3 neighbors involvement to find the right cord as no one in Sweden listens to music off of any device other than Spotify on a desktop!) I re-connected with Sharlee who I’ve always loved (MH and AE toured for something like 6 months together on The Blackening), and who Michael Amott always called “The Ambassador” as he was the dude who always socialized with the other bands, but the dude is seriously one of the coolest dudes ever. Top fucking Bloke!

Next thing I know it’s 7AM, and there Steve and I are stumbling into a taxi (that had a breath-a-lizer in it that thankfully wasn't used on us!) and what do you know? We’re just in time for breakfast at the hotel, the amazing bacon and eggs... again.

I had room 410 at the Hotel Flora, the artist loft, and every morning (well the crack of 4PM) I woke up it was raining on the patina copper rooftops outside my window. It was a pleasant sound. A church was down the street, and on the hour the bell would toll. It’s a beautiful city and looking out every morning with a gloriously mild hangover, looking at the patina and gold rooftops, listening to the rain, it was inspiring. I needed to write the lyrics and sing on one last song on the record, a really mellow piece that Dave had written and played guitar on, and that Jordan Fish and I had worked out a keyboard arrangement on. I named this track "Damage Inside.” Our friend Biffen had booked us time the next day at a studio called Top Floor studios, and that morning I woke up, wrote the lyrics on my iPhone notes, a lot of which were what I was experiencing in Gothenburg, the first lines I wrote were:

I walked over to the studio cross the street from the hotel, and sang the vocals. I free-styled the rest of the lyrics, making it up in the booth. And somehow, after 2 nights of quality raging in Goteborg, my voice had this perfect vodka and cigarette “rasp", I don’t know if I could have gotten it otherwise. It was exactly how I’d envisioned it, even though I had no idea how was going to end up.

I tried a bunch of different things, until finally something stuck. That’s how music is. You just keep on trying different ideas until they stick. Sometimes it can take months, thankfully this song came together quick. And I knew it would. I had put the song title in the track listing when the final art had already been submitted and printed, even though the song still wasn’t even worked on, but just had a feeling it would come together in the end. Committing it to the track listing willed it to power. Sometimes just letting something ferment, not thinking about it, but knowing that if you keep it out of your mind long enough, that when you finally do approach it, the ideas are going to come pouring.
And that’s exactly what happened.

In the end, I decided to start the song off acapella, (no music, just a single vocal). It was a first for us, and was a little scary, but in the end it turned out very cool. Way left-field for the album, but something I think is really different. The guitar is all Dave McClain who as you know is more known for his drumming in Machine Head than his guitar playing. It was an MP3 he recorded years ago. We had tried to re-work it a few times, but somehow it was never as cool as the very first pass he did on his laptop. So I just used that lo-res MP3, and added some cool keys, and a cool vocal.

Later that night we went back to 2112 and ate again! This time with Sharlee, Peter, Bjorn, Ulf, Biffen, and Jakob. This time I had the bacon, cheddar, onion burger, the jalapeño poppers and the 2112 beer, all of which were fantastic, and then Steve and I jumped on a train headed for Stockholm. There I began a two week promo tour tour to talk to the press about something I find infinitely difficult to “talk” about.. music! Music is meant to be listened to, absorbed, escaped with.

’Til we meet again.