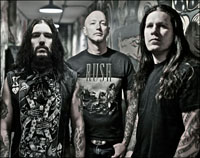 McClain and I had a really good jam session on Monday. It was one of those jam-days where you feel a breakthrough happen, a day where for no apparent reason several things fall into place and start to make sense. It is an amazing yet hard to explain feeling, but you know that a huge chunk of progress just happened! New riffs flowed, new ideas materialized and new concepts explored. It was definitely one of “those” days. We had one more day of rehearsals yesterday and we'll start demoing the new tunes today with my trusty engineer Juan from Trident Studios manning Da Tools. Phil begins his Jackson Guitars - Official! Clinic Tour overseas for a couple weeks, so it’s a perfect time to demo. I tend to take over the jam room when demoing, so rehearsals fall by the wayside as I track and experiment with a million different ideas. Europeans interested in checking out any of Phil's clinics, dates below.

"In the desert you can remember your name, 'Cause there ain't no one for to give you no pain"

As I mentioned in my last Journal, the fam and I went on a much needed vacation to Rancho Mirage in the Palm Desert area of Southern California. Genevra, myself, the 2 kids and the 2 dogs. The hotel is dog-friendly which is a cool perk and they don't even charge for the dogs, they just ask you to sign a damage waiver. The hotel itself is based around 2 smaller waterslide parks and several pools, way kid-friendly and there’s also a large golf course (though I don't play). The Rancho Mirage area has quite a few hotels based around waterparks, pretty rad, and seeing how it's the desert and was 92 degrees (33.3 Celsius to the Euros) on most days (in APRIL!!) why the hell not?

While I didn't fall off THAT hard I will say after 3 months of sobriety, it's was a freakin' blast! The hotel allows you to bring your own booze as long as it's in plastic containers, so the wife and I drank Chopin Rye Vodka Mojito's with agave (instead of sugar syrup) and fresh mint all day. No responsibilities except going down the waterslides and swimming, playing foosball or air hockey, making sure the kids had burgers and the dogs got a walk to go poop. It was nothing fancy, just good times.

Sometimes you need to hit the reset button, and that's exactly what happened.

We take our time getting down there, it takes about 2 days and rather than drive through downtown Los Angeles, halfway through the Grapevine we'll cut across towards the Mojave Desert. It's a beautiful drive with way less traffic and some of the most unusual towns and places on Earth, it's a lot like visiting an alien planet and I HIGHLY recommend it. That there is actually ANY town out there in the desert is amazing when you consider that in the summer they're smack dab in the middle of a desert that reaches 125 degrees and in certain areas have 50 mile an hour winds to boot! But yet, there are these weird, unique, abandoned ghost towns and occasionally very depressing and very real towns. Like the movie "The Hills Have Eyes" but for real and that is part of the charm. Part of what makes it such an interesting place to travel through. I bet there are some brutal bands out there.

Because of the heat (or not), many of the houses have burned down. On our travels thru the desert whenever I'd see one of these burned out houses, I'd park, and much to chagrin of my wife would go in and take photos. The smell was nothing short of brutal so I held my breath in most of them.

Check the links below.

We also stopped at an Exotic Feline Breeding Reserve near Lancaster. There were fuckin' black leopards, panthers, snow leopards, tigers, all just cool as hell! This too comes HIGHLY recommended!


There are also these areas where the wind just RIPS, its nutzo! We’re talking 50 to 70 mile per hour winds ripping at your face! So powerful that all the energy companies have erected these Star Wars-looking wind-mills in the windiest areas and it's a goddamn trip to drive through. I know these pictures don't do the height or scale of how far they stretch over the mountain-sides justice, but take my word, they're fucking HUGE!

Driving along these roads can also be a bit dangerous as the mind can start to wander. Being in deserted areas surrounded by the Earth’s energy just does things to you. It forces us to adapt and adjust. Just being out of your comfort zone forces us to do things differently and this isn’t lost on me. As I write this I’m back at home and the kids are back at school and we’re all back in our “comfort zone.” Machine Head is about to hit “record” on the next step of our (damn near) two decade journey, there are songs to write, demos to track, tour dates confirmed and obstacles to climb or go around. Windmills have been replaced with city landscapes and the empty desert highway is now clogged with Bay Area traffic. I find comfort in all of the above as I really have no choice.

I learned a long time ago how to adapt to just about any surrounding, it’s all just another extension of the desert road.