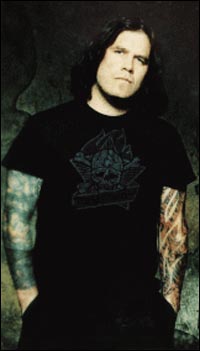 As has been reported in the media, Phil Demmel did indeed collapse onstage during Machine Head's second-to-last song Sunday night in Bristow, VA. Demmel was severely dehydrated and had mentioned several times to his tech that he felt lightheaded during the show. Says drummer Dave McClain, "That was a scary moment for all of us. Seeing your friend collapse like that is something that nobody wants to experience. He's doing much better now and taking it easy on the bus.". Machine Head wish to extend our gratitude to the good people of Bristow, VA. for their support and for being so understanding at the end of our show. Machine Head are still set to perform with Demmel at the last Mayhem stop in Darien Lake, NY.