PHIL DEMMEL On 'Chinese Democracy', 'Death Magnetic' And Loss Of His Father 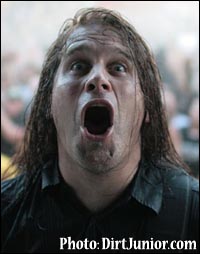 Mia Timpano, a metal writer and broadcaster from Melbourne, Australia, recently conducted a backstage interview with MACHINE HEAD guitarist Phil Demmel. The 18-minute chat, which originally aired on the Melbourne radio station 3RRR 102.7 FM, can be streamed and/or downloaded as an MP3 audio file at this location. A couple of excerpts from the interview follow below.

On whether he cares at all that GUNS N' ROSES' long-awaited new album, "Chinese Democracy", is finally coming out:

"I don't care. You know, Robb [Flynn] just brought it up to me in the airport on the way over. He was talking about the new 'Celebrity Rehab' show in America, and how it's got Steven Adler [original GUNS N' ROSES drummer] on it, and what a mess Adler is, and he's talking about Slash, and how he hates Slash because he didn't ask him to play on his solo record, and it's just the whole GUNS N' ROSES thing, man. I don't care, man. I really don't. I didn't really like VELVET REVOLVER all that much. And Axl [Rose] has got Buckethead to play with him? He's got the MARILYN MANSON guy playing guitar with him too? I don't even know what's going on in that camp anymore. But, I mean [he's] an amazing songwriter, so I'll listen to it . . . You mix endless amounts of money with, you know, drug addicts, and just the kind of individuals that they are, and that's what's gonna happen. MÖTLEY CRÜE, the same thing. I was reading Nikki Sixx's book, and it's just personalities and money."

On whether he thinks the idea that emotionally damaged people and outcasts are not exclusive to metal (and that if you went to an ELTON JOHN concert you would find the same amount of disenfranchised people) has any basis in reality:

"Yeah, I think there's basis. I just think that there's that demographic in human beings. There's gonna be that percentage of whatever, and such a great percent of that is gonna be into music. So, of course, they're going to go to those shows. And, of course, you're going to have your dysfunctioned and your disenfranchised or whatever. So yeah, I believe that. I believe that a lot of metal fans are ELTON JOHN fans, too." [Laughs] [Interviewer: "I am, actually!"] "I am as well. That was the first record I ever owned. ELTON JOHN's 'Greatest Hits'."

"I think it's their best record since the 'black' record. I like half of it, that I really like. I think it's great ideas. I love that they're playing fast again. I think the songs are a little long, but I think it's such a step in the right direction for me with that band. 'Cause it was… 'St. Anger', I heard a couple of tunes, and it was just like, 'Fuck…' I didn't buy it. I hadn't bought [a METALLICA album] since the 'black' record. I think it's something that they should be doing. Just them getting the fire back. We did four shows with them last year, and seeing them just having fun playing — they're playing 'Damage Inc.' and 'No Remorse' and all these great tunes — I think that they're back to just really having fun and being a band again. I think they're on the right track."

On whether he has ever experienced any kind of great pain in life:

"Yeah. Yeah, I have. This past year has been really hard for me. My father passed away a year ago. And the circumstances in which it happened… it was really hard for me and I'm still… I've spent the past year drunk. I quit drinking a couple of months ago to kinda deal with it. So it's been really trying for me, so. . . It happened to me when I was on tour. I was in Italy. And we were playing. And we were playing 'Descend the Shades of Night'. It's a song about death. His health had been declining, and I would think of him during the song, and I cried during the song sometimes when we'd play. . . So we had gone on to play the show, and during the show I passed out on stage, during the song. So I kinda came to, and I've had a history of blackouts. So they take me out after, and we were on our way to Zurich the next day, and I just kinda felt weird on the way there. Woke up to a call from my sister. And it was a voicemail, 'Hey, we really need you to call home. We need to speak with you.' Called home, and she gave me the news that my dad had passed. So it was kinda shocking. I knew that it was coming, but you're never ready. You're never ready to hear that news. So we decided to play the show and I was gonna fly back home. Dave [McClain], my drummer, he kept asking me, 'What time did it happen? What time did he die?' And I said, 'Man, I don't know.' And I did the math. So what happened was that [my Dad] got out of his dialysis, sat in his car, and he took they keys and set them on dashboard and just went to sleep. So it happened at the same time I passed out on stage. And just knowing that he touched me in that way was just … it was a blessing, but it still was hard to deal with. It's amazing, but it's just really hard to know that and all he circumstances. So that was it. That's my story."

On whether he has a message for the kids:

"Yeah, be honest, man. Honesty is so important in every walk of life. Be it with your parents, be it with your friends, your girlfriends, your.. whoever, your bandmates, your music. Just be honest and be true to yourself. And I don't think that you can fail."

Listen to the full interview here >>