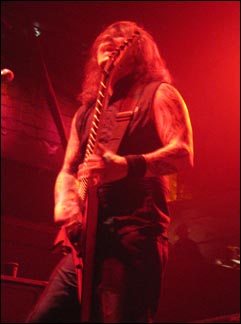 All of us here in Machine Head wish to extend our deepest condolences and sympathy to the Demmel family for their tragic loss of Harry W. Demmel. Flying home today to grieve with his family and celebrate the life of his father, Phil has asked that Machine Head continue on in his absence for what will most likely be the remainder of the Black Crusade tour. Says singer Robb Flynn, "Phil was adamant about us continuing on. We didn't think it would be possible, but a lot of the guitar players on the tour rallied around Phil last night and volunteered to help out on guitar duties. We really can't thank them all enough. Adam and I spent most of our day off today teaching Corey and Matt from Trivium, Christopher from Arch Enemy, and Fredrique the bassist of Dragonforce the set. They will all be playing various songs throughout the rest of the tour".

Regarding Friday night's show in Zurich, Flynn adds, "We left it up to Phil as to whether we would play last night, and he was very sure of the fact that he needed to play. He wanted to keep moving and not dwell on it until the next day. It was one of the most courageous things I've ever seen, I honestly don't know how he did it. To the amazing people of Zurich who stood by the band, and supported us so much last night, we were all crying, and Phil and all of us felt the love more than you will ever know. Thank you."

In other news, as has been reported in the media, Phil Demmel did indeed collapse onstage Thursday night in Milan, Italy. Demmel was suffering from the flu at the time and was severely dehydrated. Says drummer Dave McClain, "Thankfully, he was fine from the fall, his blood pressure was normal, and the medical technicians that arrived on scene all felt that he was ok. Machine Head wish to extend our gratitude to the good people of Milan for being so understanding at the end of our show."