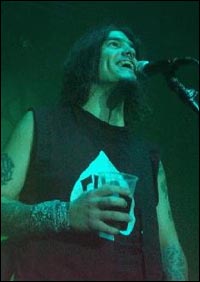 Ahhhhhh!!! What a whirlwind!!!

First and foremost, the "Halo" video is officially out, on-the-air, on the web, etc. and getting a GREAT reaction. This being our 3rd video from The Blackening - the first time that we've ever put out a 3rd video from ANY record! - we really wanted to retain the same high quality of the previous two, and we're super proud of how it turned out. Mike Sloat killed it as usual, and our friend Dean Modino at Modino Media Design did a great job bringing the artwork to life, Adam's dad, Mr. Ron Duce played an amazing evil tyrant, and all of you that made it out did a killer job! We hope you all enjoy it as much as we do.

These last few shows with Metallica have been nothing short of mind-blowing. And not just the shows themselves, but seeing how their whole camp runs their operation, seeing how they treat people, bands and fans alike, it's seriously restored my faith in humanity that things can be done a different way in the music business and still be a huge success. We have NEVER felt so welcome on a tour, and we had an absolute blast in the process.

The shows were pretty kick ass all in all... Poland took a minute to warm up but they were RAGING by the end. Spain was un-fucking-believable, raging beyond belief!!! I don't know if the fact that it was the 1st Blackening-era show we had done, but WOW?! Prague had scattered batches of MH diehards going nuts, but for the most part, they were waiting for Metallica. Portugal on the other hand... man, we've had a long love affair with Portugal... and Rock In Rio did not disappoint, they're fucking C-R-A-Z-Y!!! Those Portuguese go fuckin' BONKERS and we love every one of them for it. Jesus?! Just an awesome crowd. Insane sing-a-longs... we had a longer set than the other shows, so the Metallica guys let us jam in their rehearsal room (they have an extra set of equipment in the dressing room they use to jam on before they go onstage) so we could play some extra songs. I plugged into Hetfield's rig, Phil into Kirk's, Dave on Lars kit, and Adam on Trujillo's rig, and after having our obligatory fan-boy moments of busting out numerous Metallica songs, we busted out our cover of Iron Maiden's "Hallowed Be Thy Name". But that right there just goes to show what kind of class act the Metallica guys are. Lars was just like, "hey man, if you need to work on some songs, go jam on our shit". Who fucking does that?! We couldn't have been more impressed, nor more in awe (than we already are) of Metallica after this run. There's some good footage of it on Metontour.com (click on the Rock In Rio video link), our cover of Hallowed Be Thy Name below, and us joining Metallica for "So What".

Now I'm the first to admit that I am a total fan-boy when it comes to Metallica, we all are. But I had been hearing for a while that they had become dicks, lost the plot, rock star ego trippin', etc, so I was a little curious to see how this would go. I really was not ready for how cool and down to earth those guys were. Growing up in the Bay Area, I'd chatted briefly with Hetfield here and there. I'd bump into him at Raider games and he'd always make a point to come over and say "Hi", despite the fact that he usually had a 150 person-long line of people waiting to talk to him for the entire time he was there at the bar. I always admired him for doing that (several of these times were when we were un-signed post-Supercharger), and even more impressed that he had the patience to talk with literally hundreds of people until the line went away. I was a little apprehensive of hanging with him on this run though. I guess I have a fear of meeting people that I hold in the utmost respect because they may end up being assholes, and in general, I don't look forward to talking to most frontmen/singers, just because there's often a kind of unspoken my-dick's-bigger-than-yours thing going on. It's funny... some frontmen I walk away from thinking, "wow, that guy's a douche!", other frontmen I walk away from thinking, "man, that guys the smartest, coolest, most charismatic dude I've ever met", but when I walked away from Hetfield the other day, he had somehow made me feel like "I" was the smartest, coolest, most charismatic dude HE had ever met. I was like, how the fuck did you do that?!?! He complimented me on my rhythm playing!!?? Man, I have to admit, my brain just literally discombobulated, and I was left there stammering like some blithering idiot, "Uh... durr, dur, durr, DURRRRR!!" Seriously, the dude fucking RULES!!!

Lars and I, we've become text buddies, or to coin a great Chris Adler term, "quick-friends". Every time I get one of his "You up???!!! Let's go out and rage!!!" texts at 3:30AM, just as I'm about to go to sleep, I can't help but laugh... and when he says rage, jesus christ, RAGE he does!!!! That motherfucker can DRINK!!! GOD DAMN!!! Him and his god damn Scandinavian liver!! First night in Poland I got him, Robert, and "The Head Wiigger In Charge" on the Brown Eyes, and he hung in there hard, I think he had about 3 glasses of wine, and then 10 or 11 Brown Eyes, and was still doing pretty good at 7:30AM!!! Needless to say, it was a helluva way to start the tour!!!

And like some people, I was ready to hate Lars, I even admitted as much to him that night. I don't really have a good reason why, I guess between Hetfield's complaints about him, and the occasional seemingly pompous interviews, he just... I don't know... I guess I've just never really thought of him as the kinda guy I'd enjoy hanging out with. But I like to give people a few chances, and as someone who has also been portrayed by the media in a bad light, I realize it's important to let people have a 2nd and 3rd chance. I had never met Lars until the Kerrang! Awards in 2003, and we rapped for like 5 or 10 minutes. Nothing big, but it was a cool, fairly deep conversation considering it was at an awards show (I actually wrote a diary about it 5 years ago). The first time we ever officially "hung out" was after Wembley, and after that we recently bumped into each other at The Sword show in S.F. and did some quality raging afterwards, and I gotta say... my opinion of the dude is changed forever. He's awesome. He has been nothing but respectful, funny, self-deprecating, gregarious, and genuine to all of us. AND, the motherfucker can DRINK!!! Not to mention, he let me win at blackjack like 35 times in a row, so he's gotta be cool, right?!?!?! *ahem!*

Kirk wasn't really around much, but the dude is ON FIRE with the leads... jesus, he's KILLING it!!!

One thing I will say about the whole experience that definitely inspired us is how they make an effort to mix up their sets every night. So much so that - while we're still in the "talking about it" stage - I will say that since we've been through these markets a few times now, we are certainly looking at making a concerted effort on Mayhem and the Slipknot tour in Europe to change up the sets a little bit every night somehow. We want Machine Head's set to be an event, every day, something every band and fan on Mayhem HAS to see, and the same goes with the Slipknot tour. Maybe take fan requests or band requests, or something... we're still figuring it out, but something.

Anyway... needless to say, 2008 is shaping up to give '07 a run for its money... things are going great! Especially since the record seems to be gaining even more momentum (16 months after release... weird?!). It's definitely been amazing winning so many new fans and exposing the band to people who might not have ever heard us. We're really looking forward to headlining the Jagermeister stage on the Mayhem Festival this summer, super stoked to head overseas with Slipknot later this year, it's gonna be a hell of a second half, I'll tell you what.