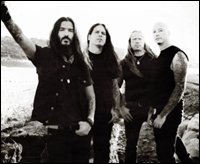 The organisers of Download Festival spoke about Machine Head's set on June 8th and revealed that the thrash titans had a record 29 circle pits going off during one song in their set.

Speaking about this, he said: "Machine Head were amazing, they've broken the record for the number of circle pits at any one time. Apparently they had 29 circle pits going off at one time. I said to them as they came off, 'Couldn't you have hit the 30?'. It was amazing."

Kerrang! magazine also conducted an interview with guitarist/vocalist Robb Flynn of San Francisco Bay Area metallers MACHINE HEAD at this year's edition of the Download festival, which is being held June 8-10 at Donington Park in Leicestershire, United Kingdom. You can now watch the chat below.