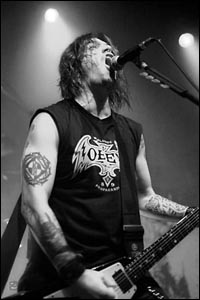 Machine Head's Seattle performance on the "More Balls, More Volume, More Strength" tour had to be cancelled Saturday night after Robb Flynn came down with what is, according to doctors, a severe bronchial infection. As many of you know, the band absolutely hate the idea of cancelling a performance, and as such extend their sincerest apologies to the fans in Seattle that weren't able to see them tonight. Flynn's condition unfortunately calls into question the status of tomorrow's performance in Portland as well, so stay tuned, we'll be sure to let you know as soon as possible if the band will again be unable to play.