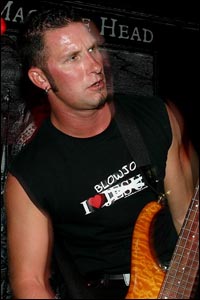 MACHINE HEAD has recruited Brandon Sigmund from fellow San Francisco Bay Area metal band HOSTILITY to handle the bass parts on the group's upcoming North American tour, BLABBERMOUTH.NET can exclusively reveal. Sigmund is the temporary replacement for regular MACHINE HEAD bassist Adam Duce, who was forced to sit out to upcoming trek after suffering a broken leg while dirt biking in Redding, CA. Initially thought to be nothing more than a bad sprain, x-rays later confirmed the break, which required surgery to attach a steel plate and two screws to the broken bone.

All The Black Tyranny dates in the U.S. will go on as scheduled, and Duce will be returning for the Australian and European legs of The Black Crusade Tour, beginning with the band's Loudpark date in Japan.