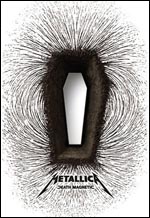 From Metallica.com:
As promised, we're back late on a Sunday in California to bring you not one, not two, but eight additions to the European indoor arena tour! We'll be starting off on February 25 in Nottingham, England and will be storming through seven other cities in the UK, including two stops in London at the O2. The guys from Machine Head and The Sword will be there too!

We couldn't call it a night back here in CA without one more announcement . . . back to Holland on March 30 at Ahoy in Rotterdam. The guys from Machine Head and The Sword will be there too!